Learn More About the Sharks of the Kimberley

The blacktip reef shark is common in the Kimberley and is easily identified by distinctive black tips on some or all of its fins. As the name suggests, it stays close to coastal waters and feeds on reef fish, crustaceans and squid. This shark grows to around 1.5 to 1.8 metres in length and is not considered dangerous, although has been known to nibble on feet and legs in the shallows!

The zebra shark is easy to spot thanks to raised ridges along its back and a spotted pattern. If you’re wondering about the name, juvenile zebra sharks are striped before transitioning into spots. They grow to a length of around 2.5 metres and frequent coral reefs and sandy areas to feed on molluscs, crustaceans and fish. You don’t need to worry if you come into contact with any of the resident zebra sharks – they’re extremely docile.

Bull sharks are widespread and resourceful, flourishing in both salt and fresh water and they enjoy the warm waters of the Kimberley. Adults average around 2.4 metres in length, with the females being larger than the males, and have a stout build with grey colouring on top and white underneath. Bull sharks aren’t fussy when it comes to their diet and will eat almost anything they can get their teeth on.

Tiger sharks can be found in northern waters across Australia, including the Kimberley, and can often be found close to the coast. They can grow up to 6 metres in length and have been named due to their distinctive striped markings. Tiger sharks are renowned for being scavengers and have a go at pretty much anything including fish, marine mammals, stingrays and turtles.

You can’t have two of the world’s most ferocious predators living in the same area and not expect that they’ll have a run in every now and then. There have been well documented cases of saltwater crocodiles venturing out from rivers and mangroves to feed on fish before also deciding to have a go at the resident sharks. For many of the local sharks, they would be seriously overpowered by a massive saltie!
At Ocean Dream Charters, our experienced crew are excited to show you what this beautiful part of the world has to offer. Let us take care of everything aboard out 80 foot luxury twin hull catamaran while you sit back and enjoy the scenery. Whether you’re looking for a scheduled cruise or prefer the option of a private charter, we have the perfect option for you for an unforgettable holiday experience.
To book your Kimberley cruises, contact Ocean Dream Charters today on 1300 944 727. 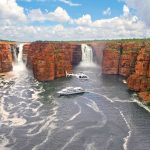 Our Top 5 Must-Do Activities in Broome 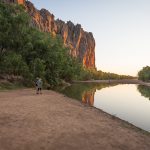